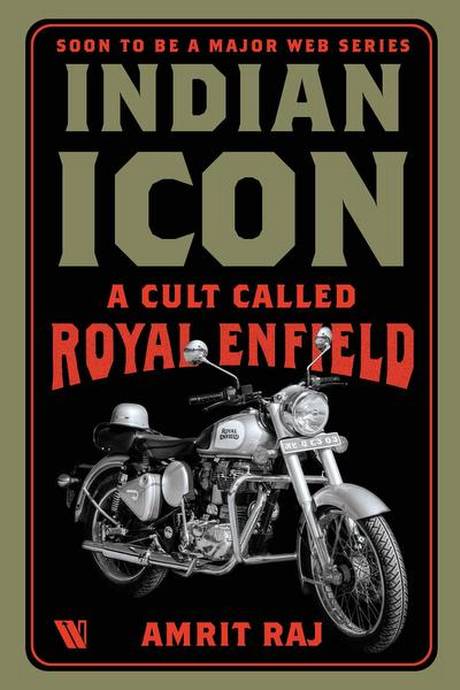 The thump of a Royal Enfield Bullet is often deemed as the Indian roads’ surreal anthem. It is a motorcycle redolent with nostalgia and built on roots spread between England and its ethnic heartbeat — Madras then, Chennai now. Ask a man on the street about his wicked automobile dreams and you would trigger a yearning towards riding a Bullet or driving an old Mahindra Jeep or a Maruti Gypsy.

It is an emotion that petrolheads would understand. Southern heart-throb Dulquer Salmaan once said he is a ‘car guy’s car guy’. Likewise there are enough bike guy’s bike guys and in all their hearts, Royal Enfield occupies a fuzzy corner. This heritage brand’s story needed to be chronicled in an exhaustive and interesting way. And it is a task that business journalist Amrit Raj assigns himself in his book Indian Icon.

He offers both the warm eye of a fan and the cold gaze of a cynical hack. Before he delves into the brand’s origins, slump, eventual revival and the attendant churn, he speaks to the bike’s lovers. There are gems to be savoured and Bobbee Singh from Old Delhi quips: “She is temperamental. She has mood swings. She does drama on a daily basis. She is known to be a jealous motorcycle. It might sound funny to you, but it is true.”

The 350cc bike has its quirks and Amrit doesn’t flinch in stating the obvious truths, like how it was referred to as the Oilfield once since it used to leak engine oil. But eventually this is part homage, largely historical research and all stitched together with a journalist’s rigour. With Eicher Motors stepping in to own Royal Enfield and its biker-boss Siddhartha Lal infusing passion into a brand which once seemed headed the good old Ambassador’s way into oblivion, Amrit has enough material to chew on.

Midway through the book, Amrit gets his analysis spot on: “The motorcycles that it made were timeless in sensibility and appeal yet approachable and relatively affordable and would encourage the owner to be hands-on.” Equally, he stresses that the brand cannot be a one-trick pony relying entirely on the Classic range, a viewpoint reiterated by industry watchers.

While the author pens about the way the Classic was conceptualised and the rides into the mountains which helped invigorate the company, he is brutally candid about the teething issues that marred the Himalayan brand and the fiasco surrounding the promotion of Pegasus and Signals. He also offers snapshots of the few personality clashes but overall Amrit stays the course of offering a wholesome portrait of a brand that has turbo-charged the retro-cruiser segment, which now also has the Jawas, Benellis and Hondas eyeing a slice of the pie.

This book isn’t meant only for those who gaze at a Bullet and wistfully sigh. It is also relevant to a wider audience keen to figure out a valued company’s evolution and the fresh roads it is charting, be it in India or abroad.

The rise of Kamala Harris to become the U.S.’s first ever woman Vice-President, and the first of mixed Indian and African American heritage, will...
Read more